Provide our mountain knowledge and its safety rules to a freeski event signed by Red Bull.

For 7 successive years, we have worked on the Red Bull Linecatcher, a forerunner event of backcountry ski : freestyle ski jumps in off-piste freeride.

Several weeks before the event, side by side with Julien Régnier – designer and sport director – we conceive and erect on the competition site : start and finish zones and the jump lines. The problem : shape the snow constructions incorporated to the mountain, make them invisibles not to deteriorate the landscape. But they have to be big enough for the worldwide riders to realise impressible tricks.

Our technical mountain knowledges have been require in order to rise safety in those steep slopes, favorable spot for avalanches. Hoisting by helicopter, strings’ and snow blocks’ manipulations were our daily life for four weeks.

Our mission was extended to the event in order to insure the riders’ and workers’ safety in the mountain, while enabling the take of beautiful pictures for Red Bull. 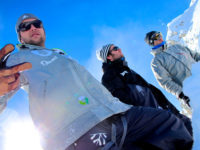 7 collaborative editions between FEEL Experience and Julien Regnier for this Red Bull event.

4 weeks of operation to spot the face, build the jumps and provide security during the event.

12 hélitreuillages on average per edition to preserve a virgin ground and to access dangerous areas.

20 m³ of snow by shaper jump, or thousands of shovels to build these modules in full face freeride.